Marketing is a never-ending moving target. At its core, you’re simply trying to be in the right place at the right time with the right solution. This component of marketing never changes. The execution, on the other hand, is in continuous state of flux, and knowing when to jump on a new idea can make all the difference between success and failure.

In the beginning, new marketing tactics perform extraordinarily well - far better than they ever will later in their lifetime. 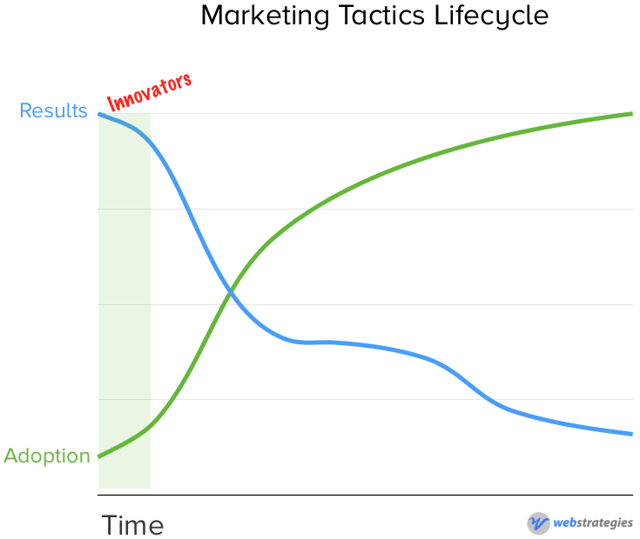 In the early 2000’s, you could achieve 90% open rates with email marketing or purchase the most popular Adwords keywords for $.05. Today, keywords cost over $1 per click, and the average email open rate is around 25%.

The lucky few who enjoy these unimaginable levels of performance are the earliest adopters, or the ones who invent the strategy or technology altogether (the innovators).

The most recent example of this was Pokemon Go. Businesses who jumped on the platform within the first two weeks saw remarkable success driving people into their business.

Luck and skill plays a major role in this stage; therefore, this level of success shouldn’t be the expectation for every business.

The effectiveness of a digital tactic begins a steep decline as these services become commercialized (think "Pokemon Go Guru Consultant").

In this stage, adoption increases significantly and consumers begin to see repetition.

A strong ROI can still be expected in this stage, but only by the businesses who keep their ear to the ground and are willing to move fast on emerging tactics. 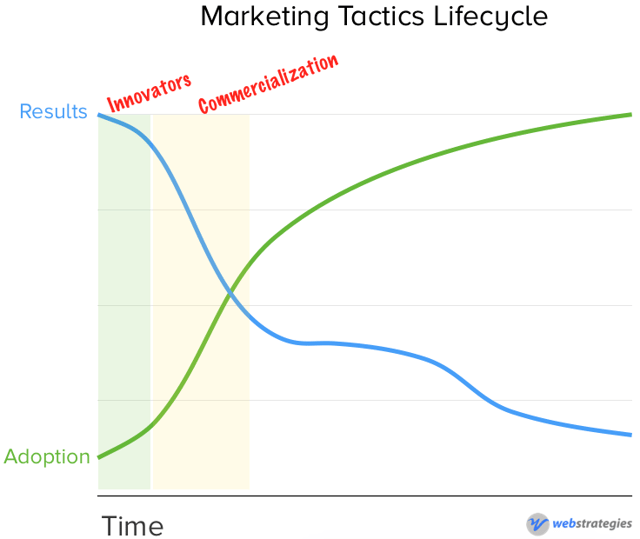 Forward-thinking small to medium sized businesses should be active in this early adoption stage. These are the businesses who have a strong marketing team in place and are willing to fail in the name of progress.

At this stage, adoption is approaching its peak, and the effectiveness has dwindled to its lowest point.Experts selling the service have become a commodity, driving down price and quality. 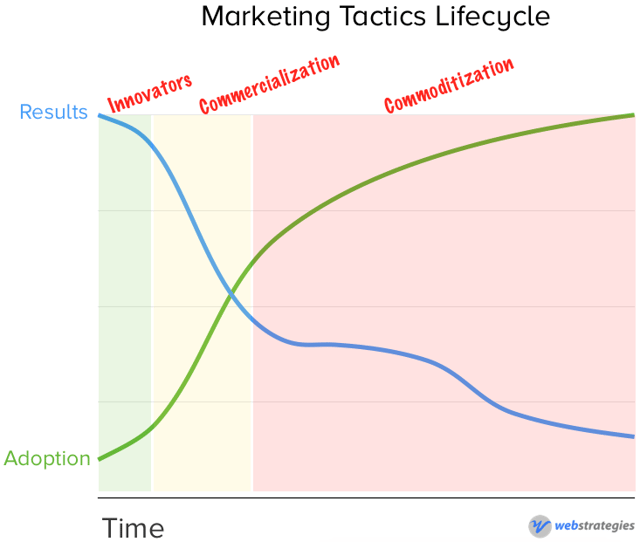 This isn’t to say a good ROI can’t be achieved. Many businesses have gotten into the game at this stage while enjoying reasonable success.

Search engine optimization, pay-per-click, and email marketing are all on this stage of the adoption curve. Having existed for nearly 20 years, most businesses have adopted or attempted these tactics.

Implementing these tactics for the first time will require more patience, as they’re less likely to result in immediate success.

How To Increase Your Chances Of Marketing Success

Marketing dashboards should show your primary tactics and the business outcomes they are trying to influence. This ensures you’re keeping attention on both the activity you can directly control and the outcomes you want to influence.

If you successfully execute tactics but fail to experience the desired outcome, your tactics should be revisited.

In the world of marketing, nothing is guaranteed. You must be willing to try new things, to experience failure, and to keep pushing forward.

Furthermore, be willing to give a new idea enough time and budget. You’d rather fail because the idea was ineffective, not because you didn’t give it a fair chance.

Go Out Of Your Comfort Zone

We’ve seen clients refuse to experiment with new tactics because they personally don’t like being on the receiving end of them. For example, “I think pop-ups are annoying, so I won’t try it for my business."

As it turns out, pop-ups can be widely successful when executed correctly. Business who are willing to put their personal feelings aside have capitalized on this tactic, while those more conservative have nothing to show for it.

Mankinds greatest discoveries have come from pushing our boundaries, and the same goes for our little world of marketing. Stay open minded, be willing to fail, and keep your focus on the end goal.