In a recent post, Small Business Salespeople – a Formula to Follow, I outlined 5 important elements to a successful sales program for smaller businesses. This article focuses on one of those elements – having the right sales incentive compensation plan that helps to create a motivating environment.

First, you can’t really motivate a salesperson, you can only create an environment that gives a self-motivated person the opportunity to excel. So, the first challenge is hiring the right salesperson. Once you’ve got the right people, implement a sales incentive plan that inspires them to excel.

The first step to creating a sales comp plan is knowing what the business can afford. To get started here, simply divide the cost of a salesperson by the revenue he generates. Example - if the total cost of the salesperson, including payroll taxes and benefits, is $50,000 and he generates $500,000 in annual revenue, your cost of sales is 10%. When you do this calculation, also consider vehicles, expense accounts and other expenses directly attributable to the salesperson to get to a total cost-of-sales. Once you do this calculation, you’ll have a starting point.

If you don’t have an existing salesperson, this calculation gets a bit more complicated. You have to consider your entire cost structure. First, determine what the direct costs to fulfill a sale are. Let’s say you sell something for a $1,000 and it costs your company $500 to fulfill on that service or to purchase that product. Your direct cost of sales is 50%, often referred to as your cost-of-goods-sold (COGS). You also want to make a profit and you feel comfortable that a 10% net profit is appropriate for your industry.

What’s left? – 40%. This means you can pay a salesperson up to 40% of what he sells. I don’t recommend you invest all of what is left to pay your salesperson, but this calculation gives you a ceiling, a break-even point, on how much you can afford to pay a salesperson to generate revenue for your company.

How companies are paying their salespeople

A recent study by the National Association of Sales Professionals found that nearly half of companies pay their salespeople a combination of base and commission. 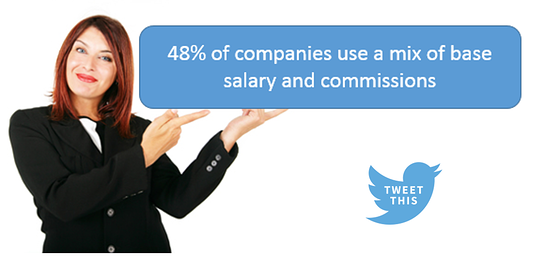 As you consider the best mix of base and commission, think about your company’s sales process. If the individual salesperson plays a critical role in prospecting and closing the sale on his own, reward that behavior with a fairly rich mix of commission that drives good behaviors. On the other hand, if your sales process involves others like sales engineers or other technical people, then you may want to lower the commission rate and increase base salaries. The more people involved in the sales process, the less aggressive your commission rates should be.

In every sales team there are “stars”, “core performers” and “laggards”; and quotas play a role in creating a motivating environment for all of them. Stars will likely exceed whatever target you set for them. However, they may stop once the target is exceeded unless there are additional benefits to keep going. For the laggards, quotas set a standard that can be applied in your performance management activities.

A tiered structure, in which higher levels of performance generate more compensation, has a positive impact. In a study reported by Harvard Business Review, “core performers striving to achieve triple-tier targets significantly outsold core performers given only two tiers. On the contrary, multi-tier targets did not motivate stars and laggards as much with no significant differences in performance among those segments. These results suggest that core performers exert more effort if given additional tiers. Stars are presumably unaffected by the extra stepping stone because they view the top tier as attainable regardless of the number of targets. And the inattentiveness that laggards show suggests that they typically aim for and are satisfied with achieving the first-tier target.”

Setting a cap on commissions

In some large equipment companies, the top salesperson makes as much as the CEO. This begs the question – should you put a cap on commissions? In a study of a manufacturing company, the sales team increased revenue by 9% once the company removed a quota ceiling and replaced it with a more creative method for continuing to reward performance beyond the ceiling. Capping commissions may control costs, but it also encourages stars to quit selling.

Other forms of sales compensation

In addition to money, other forms of compensation can create a desire to excel. Creating a contest for a short period of time to get the sales team excited can be very effective. Studies have found employees want time off in addition to competitive pay, so reward your contest winners with a trip and time-away with their families. Doing so adds an additional emotional element to the reward. Also, have multiple winners if possible. Studies on contest effectiveness have found that contests with multiple winners boost sales effort and performance better than contests with winner-take-all prize structures.

In summary, create an environment that enables a self-motivated person to excel. One element to an inspiring sales environment is an effective sales compensation plan. First, figure out what you can afford to pay a good salesperson. Evaluate what you want that person to do, and establish a commission and/or bonus structure based on quotas and tiers of sales performance. Consider other forms of incentive compensation, like contests and time-away, to keep the environment fresh and stimulating. Finally, keep your sales incentive plans fluid. As your business evolves and matures, make sure your compensation plans evolve to create a winning environment for the salespeople and the company.