I recently stumbled across what had to be the most deliciously evil culinary concoction I've ever laid eyes on. Behold, the BACON EXPLOSION 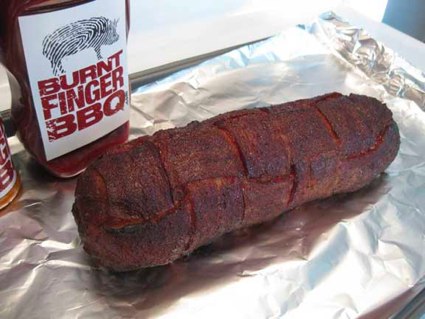 So what is this thing? It's a sausage roll with bacon inside rolled up yet again with a latice of more bacon. Smoked for 2.5 hours, doused and smothered in BBQ rub and sauce and served to your coronary delight.

Ok, so now you're asking, "Chris, I know you're smart and good looking, but what does this have to do with social media?"

Here's the backstory: The bacon explosion was created in Jason Day’s kitchen with the help of Aaron Chronister, who anchor a barbecue team called Burnt Finger BBQ. Jason and Aaron were looking for ways to get more traffic exposed to their site BBQAddicts.com. More traffic would mean more advertising revenue, which they needed to help fund their expensive BBQ'ing hobby. They decided to do something over the top - something people would get interested in and want to share. Thus was born the Bacon Explosion.

Let's pause here for a second and look at two very important words: share and expose. Jason and Aaron knew if they could come up with a wild enough idea (related to their site), other people would want to share the idea in turn exposing more and more people to their site. Social media and networks accomplish this better than any platform ever has.

So what happened next? Once Jason and Aaron posted the recipe on their website, they shared it with their network (Facebook and Twitter), who then shared it with THEIR friends who shared it with their friends. All the while, their site was getting submitted and hitting the front pages of Digg and StumbleUpon - some of the internets most popular social bookmarking sites.

Now it was out of control. The story was picked up by Men's Journal, the New York Times, Good Morning America, Fox & Friends, etc. At last count their site had 13,000 inbound links, just under 3x the calorie count of the bacon explosion itself!

Are you still wondering how they monetized this beyond simple ad revenue? Take a look at the picture above again. Behind the Bacon Explosion is, you guessed it, their signature BBQ sauce and BBQ rub - both of which are listed on the original recipe, were seen by hundreds of thousands of people in just a few months, and are available to buy through their site.

This is just another of the thousands of examples of how new media have changed, and greatly accelerated, the path to popularity and business success. You have to be remarkable, but the opportunity is there and it is huge.