Ad Blockers: Is Your Display Advertising at Risk? [Facebook Live]

Could your display ad campaigns be doomed? In the last episode of WebStrategies Live, we covered the latest news on ad blockers, and there has been a lot of news lately.

Ad blockers are used by an increasing number of people, and popular browsers are rolling out their own ad blocking. 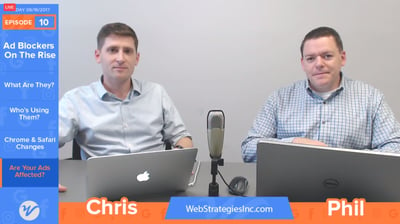 Goliaths Google and Apple recently announced ad blocking they plan to roll out on the Chrome and Safari browsers. Between the two browsers, they represent a huge chunk of desktop and mobile browser use, so all digital advertisers should be taking notice.

Then there are user-installed ad blockers, and since the number of people using these on desktop has doubled in the last three years to about 20% reporting they've used one in the past month, they are having an increasingly large impact as well.

Are your ads at risk of being blocked? Watch the recording of our broadcast below to find out.

If you have additional questions, feel free to reach out to me at chris@webstrategiesinc.com.